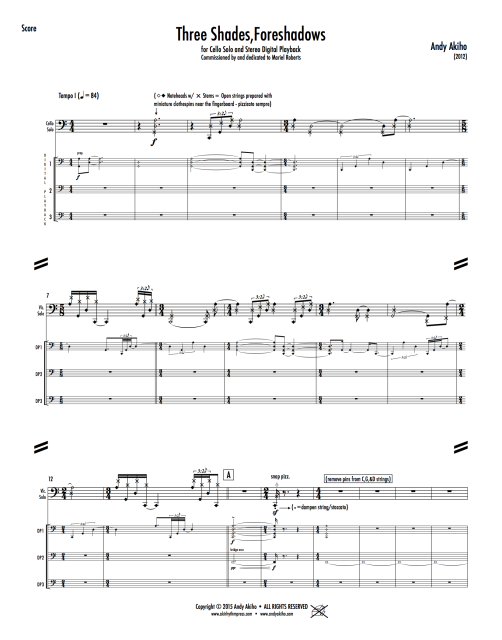 ​Three Shades, Foreshadows is a cello solo with stereo digital playback written for Mariel Roberts. The live solo part is often shadowed, or mimicked by the other three electronic parts.

The title and much of the material was inspired by Auguste Rodin’s sculpture “The Three Shades” – a sculpture composed of three identical bronze casts positioned so that the viewer can observe multiple perspectives simultaneously. My goal was to create a similar effect acoustically while blurring any distinction between the live performer and the three digital playback parts.

Every live sound that is being created by the performer is also present in the electronics part, and every available sound of the electronics part is a sample from the acoustic cello. This was achieved by recording Mariel executing isolated percussive sounds across the entire range of the instrument. These samples included scratch sounds, col legno battuto attacks, pizzicati, snap pizzicati, clothespin-prepared string pizzicati, knocks/slaps on the wood and strings, and perpendicular bowing on the bridge. The samples were then combined to form impossible, superhuman hyper-rhythms in the electronics part, thus creating a quartet of mimicking shadows with the live cello part.

The piece begins with pizzicati on strings prepared with mini-clothespins attached near the base of the fingerboard – a technique that was introduced to me by composer colleague Christopher Stark in the summer of 2011. The preparations create bell-like tones that sound very similar to tuned gongs. Throughout the rest of the work, one clothespin remains on the highest string, so that the open-stringed pizzicato serves as a recurring gamut.

To replicate the spatial relationship of different angles in Rodin's sculpture, the electronic playback makes use of panning/stereo effects to resemble three different acoustic perspectives. The live cello is acoustically in the center, while the digital playback is spread in three-dimensions between extreme left, right, and center. This further enhances the kaleidoscopic effect where the performer and electronics interact to move the audience’s focus and perspective back and forth throughout the piece.