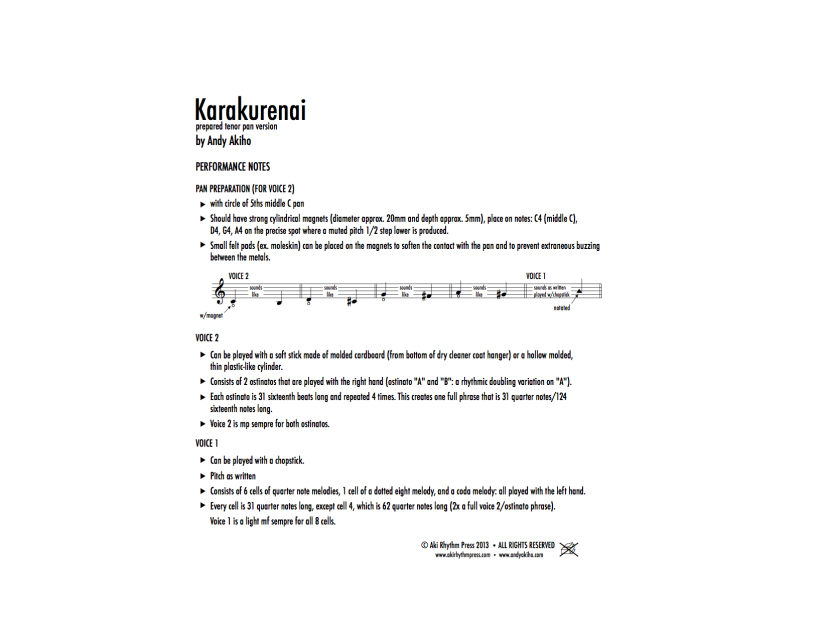 For Any Instrumentation or Number of Performers.

(Note: You MUST purchase a physical copy to add on the PDF option.)

All of the scores sound in the same key.

(The first note of all scores sounds B natural concert pitch)

Add to Cart
"Karakurenai" (Japanese for "foreign crimson") was originally written for solo prepared steel pan during a visit to Rochester, NY in June 2007 as part of the Synesthesia Suite; however, this piece can be performed on any combination of instruments and can include elements of improvisation if the performer desires.

​The original steel pan version is prepared with cylindrical magnets or poster tack placed on four pitches (C, G, D, & A). These preparations cause the four notes to drop a semitone and produce a muted timbre (for example, using these preparations, 'C,' the lowest note of the instrument, sounds like a muted 'B,' one half-step below the original). The ostinato, or repeated pattern, in the right hand is played with the cardboard tube of a dry cleaner coat hanger, while the left hand plays the melody with a wooden chopstick.